September 18, 2017
Welcome to my stop on the Blog Tour for The Secrets You Keep by Kate White! 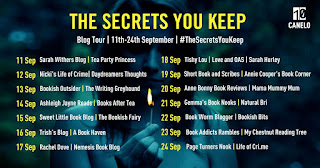 You’ve lost your memory. A woman has been murdered. Your husband is keeping secrets. How do you know who to trust?

Months after a being involved in a terrible car crash, Bryn Harper is physically healed but her emotional scars remain raw. She has no memory of the accident and is plagued with bad dreams.
When Bryn and her husband, Guy, host a dinner party Bryn swears money has been stolen while Guy seems unfazed. Bryn confronts the caterer that night and is horrified to discover the woman’s brutally slain body the next day.

As the case is investigated, Bryn is dragged into a fresh nightmare and learns that Guy is keeping things from her. Another murder occurs and Bryn realises the danger is getting ever closer to home. How well does Bryn really know the man she loves?

For fans of psychological suspense and compulsive mysteries, don’t miss this tense and page-turning novel. Before I Go to Sleep meets The Husband’s Secret 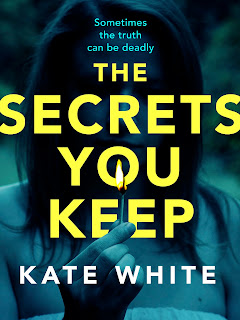 I’m in bed asleep by the time Guy arrives home, and I stir when I feel him slipping under the covers. He spoons me and rakes his fingers lightly through my hair. I relax into the curve of his body, soothed by his touch.

When I wake in the morning, the other side of the bed is empty. From the bedside clock I see with a start that it’s nearly eight. Guy will have to split soon, and I want time with him before he goes. I close my eyes again, trying to recall if there’s been another dream, but no, nothing. Simply fuzzy, meaningless fragments in my mind.

I toss the covers back, struggle up, and slip on jeans and a cotton jersey. A few minutes later, walking into the kitchen, I find Guy reading the news on his iPad, coffee mug in hand. He’s dressed in a perfectly cut suit, one of his navy-blue ones, and a blue-and-white-checked shirt. No tie today.
For the first time I notice that his face is already a little tanned this season, mainly from grabbing an hour here and there on the tennis court. As he looks up at me, with his slightly hooded, slate-blue eyes, I feel a moment of déjà vu. It was two years ago this July, as I stood on my friends’ deck in Rhode Island, that I saw him slide open the glass door and step outside. Tall and well-built, he was deeply tanned then, and his full, gorgeous lips were chapped from both wind and sun. He caught my eye and smiled. I knew in a split second that something was destined between us. And he did as well.
Yes, I could tell he was older than me—seven years, I soon discovered—which was just fine. It was time for a guy mature enough to be truly comfortable in his own skin and who wouldn’t flinch at my success, the way Marc, my previous boyfriend, had. I wanted a guy eager for a full partnership.
‘Morning,’ he says, and flashes a smile. ‘I was afraid I might have to go more than twenty-
four hours without seeing those baby blue eyes of yours.’

I cross to the table, lean down, and kiss him hello. He smells fresh from his shower, with a hint of citrusy-scented cologne.

‘I didn’t even hear you getting dressed,’ I say.
‘I was trying to do my best quiet-as-a-mouse routine.’
‘From now on, wake me in the morning when you get up, will you? Even if I curse loudly in protest.’
‘You sure? You looked pretty zonked out this morning.’
‘Yes, please.’ My gaze drifts across the table to the place where I usually drink my coffee in the morning. On a small plate sits a huge, scrumptious-looking scone. ‘Oh my God, what’s this? Manna from heaven?’
Guy laughs. ‘Manna from Mrs. London’s bakery. I dropped by yesterday at lunch and picked you up a few blueberry scones.’
‘Oh, honey, that’s so sweet. You know how much I adore these.’ Guy and I spent our honeymoon in London and then the Scottish Highlands, and I devoured scones and clotted cream almost every day I was there.
I pour a cup of coffee and open the fridge for butter. ‘So tell me about last night. Did you make any progress?’
‘Seems like it. I convinced Mario to join us and he even sang a little at the table. People applauded. I’ll know tomorrow if the donor’s fully back on board, but my bet is yes.’
‘That’s fantastic.’

I planned to mention the dream to him, to see if maybe he could offer an objective view on what the new detail means, but he gulps the last of his coffee and I sense he’s ready to fly.
‘About tonight,’ I say instead. ‘How fancy are people likely to dress?’
‘Not too fancy, at least compared to New York. The guys will wear jackets and the women will be kind of dressy but probably conservative. Not Derek, though. The few times I’ve seen the guy he’s been in old cords and a sweater—and usually the same ones.’
I laugh. ‘Okay, conservative then. I’ll leave the slutty tops in the drawer.’
‘Just until the weekend, okay?’ He smiles and then checks his watch. ‘I’d better split. I’ve got an eight-thirty.’

Kate White is the New York Times bestselling author of twelve works of fiction: seven Bailey Weggins mysteries and five stand-alone psychological thrillers, including most recently, The Secrets You Keep. For fourteen years she was the editor-in-chief of Cosmopolitan magazine, and though she loved the job (and the Cosmo beauty closet!), she decided to leave in late 2013 to concentrate on being a full-time author and speaker. 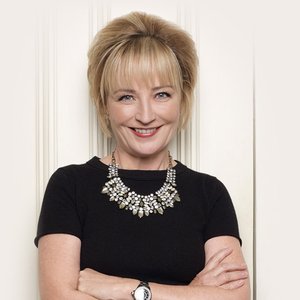