Welcome to my blog tour stop for All Together Now by Gill Hornby!


I'm very excited to welcome Gill today with an extract just for you! This book is fantastic, have a look and then go buy it! You'll love it, it's such a feel good story! 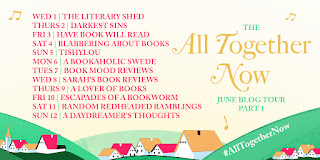 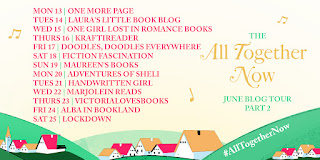 The small town of Bridgeford is in crisis. The high street is half empty, businesses are closing and the idea of civic pride seems old-fashioned to the commuters rushing home from work. Somehow, it seems to have lost its heart.

But there is one thing that might just bring the town together: music. The Bridgeford Community Choir has a chance of winning the county championship. First though, the small band of singers must find a lot of new members and a whole new sound.  Enter Tracey - one of life's soloists, and hiding a secret past; Bennett - a church choir refugee, baffled by the modern world. And Jazzy - who sees her voice as her passport straight out of town to a future of fame and fortune. Can they really fit in with dependable old regulars like Annie? Can they learn to work together, save their singing group and maybe even their community?  All Together Now is a funny, sharply observed and moving novel about the joys of singing, about living in harmony, about falling in love... and about the importance of finding your own, true voice.

So, without further adieu, here we go!

"Tracey picked up the milk, screwed on the lid, turned off the TV and silenced the music. To be totally honest, she wasn’t really in the mood for The Bloodshitters right now. Billy’s career path so far had been paved with disappointment and Tracey knew, from long experience of his various job opportunities, that this one was unlikely to last beyond the week. Still, she must hope for the best. ‘My son, the barman . . . ’ It had a certain ring to it.And even if it didn’t turn out to be his thing, she did at least have the place to herself for the
evening.
She looked around her. The L-shaped kitchen/lounge was nowhere near big enough for both of them now there was so much more of Billy than there used to be. She picked up one cereal bowl from the floor, stepped over a games console and reached down for a second. Of course, it would be much easier to live in if it were actually tidy. When you looked at these places – ground-floor garage beneath first-floor living area, with two beds and a bath on the second – they were a masterclass in space management: such a small footprint on the earth, yet just enough room for living crammed up above. No doubt they had neighbours who were even rattling around, but as they had never spoken to any, they couldn’t possibly know. She balanced a third bowl on top of the others and picked her way back to the kitchen.
There was more cereal detritus in there. She poured herself a glass of wine, took a hearty swig and started to potter around the work surfaces.
La, la, la, la-la
Le la la le la-la
She picked up two knives caked in butter with crumbs stuck on, removed the spoon poking out of the peanut butter and put them in the dishwasher.
La, la, la, la-la, le
An unfamiliar sense of contentment began to creep over her while she wiped down the counter. Of course, her relationship with Billy was about the best between mother and son since . . . since . . . Her memory scanned through the respectable amount of history and literature that she had taught herself, but came up with no positive example. Surely there must be one famous one where they didn’t end up either shagging or killing each other? Anyway – she squirted neat washing-up liquid on to the filthy frying-pan – the thought of an evening at home without him was not an entirely unpleasant one. Her wine glass was unaccountably empty; she poured herself some more.
Tum tum ti tum tum
Tracey became aware that, rather than the raspy, throaty one that she used when she was singing along with Billy, she was using her chest voice for once, and she could feel the calming, anti-depressant effect of it on her stressed-out body. But it wasn’t until she was back in the living room, tucked up with her glass and the bottle on the sofa, that she realised exactly what it was she was singing. Christ almighty. Those bloody belters had wormed into her ear, through to her brain, down to her lungs. They had regressed her. She was regressing. For the first time in nearly thirty years, she was spending the night in alone pretending to be Karen bloody Carpenter. How sad was that?
Tragic, she thought, as she bounded out of her seat. The one great thing about being Tracey Leckford was that she was so much cooler in her thirties and forties than she ever had been in her youth. She opened the cupboard under the iPod and rootled around in the back. Billy had no idea about her past, and she was determined it would stay that way. Aha, there they were. Their unit – such a depressing little word, ‘family’; she never used it – was founded on rock and metal, hard and heavy; strong, firm, reliable. And that was how they both liked it.
She pulled out the ghetto blaster with the box of her old cassettes and blew off the dust. The sense of recognition and familiarity was almost overpowering – like being reunited with an amputated limb. The music of her youth had been so hard-won, looking back on it. All that saving up and borrowing and hanging out in record shops; all that transferring and organising and arranging her day around airplays on the radio. Tracey would never say it out loud – she had an Old Fart Warning signal hard-wired into her brain now to stop her saying anything like that out loud – but she wasn’t sure, in this click-click-download world, if songs had quite the same value that they used to. So much care had gone into the making of the tapes in this box, so often were they played, that Tracey still knew immediately what was on them, just by looking. The ones labelled TOP OF THE POPS, for example, probably did not bear revisiting. She had made those herself with the mic pressed up to the screen and the quality wasn’t marvellous: one ABBA performance, which might have been rather precious, was ruined at the point where her mum asked her dad for a cup of tea. But it was the mix tapes she was after tonight, and one in particular. She took it out. GIRLS’ NITE IN, it said, in pink felt pen. Wow, so she was that lame? She looked around, nipped over to the kitchen window and snapped shut the Venetian blinds, opened the garage door to check the coast was clear . . . No one need ever know. Dimming the lights just in case, she put the tape on, stood stock-still in the middle of the carpet, gave a smile and a nod in the direction of Richard on guitar – or, in this particular instance, the bookcase – and began:
I’ll say goodbye to love . . ." 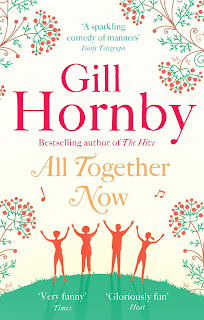 I loved this book! It made me really happy and hopeful! It's a book that made me laugh, smile and cry a little! The characters are so likeable and normal... I wish I had some singing ability, I would join a choir in a heartbeart! But sadly, no...
This is the first of Gill's books I have read and I will be seeking out more now, such an easy to read style and I was left with a feeling up peace and being uplifted. 9/10
All Together Now is available now from Abacus.
Thank you so much to Grace Vincent at Little Brown for providing me a copy of this gorgeous book to read in exchange for my honest review and to the lovely Gill Hornby for letting me share this extract with you!