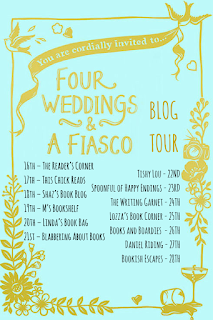 Welcome to my stop on the Blog Tour for the fantastic Four Weddings and A Fiasco by Catherine Ferguson!
eBook & Paperback: 16th June 2016
Katy Peacock lives a life as colourful as her name.
As a wedding photographer, she spends her days making other people smile as she captures all sorts of fun and capers at celebrations that range from the wacky to the wild.
But her own life isn’t looking quite so rosy. Her mum is acting out of character, her menacing ex is back on the scene, and she is torn between two gorgeous men. And that’s before we even get started on the trouble her sister is causing . . .
As Katy weathers the ups and downs of the season, she revisits problems from the past, discovers new friendships and finds that four weddings and a fiasco have the power to change her world beyond measure.
I'm very excited to host an extract of an exclusive short story featuring the characters from the novel! Take a look and then go buy the book!
ONE BRIDE AND A BOMBSHELL
7
His shoulders slumped.  ‘It’s my relationship. I’m just not sure we’re right for each other.’
‘Oh.’ I gazed at him in sympathy. ‘Does she – he – know you’re having doubts?’
He smiled. ‘She is lovely. Beautiful, generous and so incredibly selfless.’ He shook his head in awe. ‘She’d help anyone. Even a stranger in the street. Especially a stranger in the street. I’ve seen her empty out her purse for a homeless person.’ He splayed out his hands and stared sadly down at them. ‘She runs for charity every year to help kids in Africa, even though she’s got asthma and she’s scared of having an attack. She’s done that since she was a kid.’
‘Wow,’ I breathed. ‘She sounds amazing.’
‘She is. She was bullied constantly when she was at school. She said the other girls were jealous of her long blonde hair and were always threatening to cut it off.’
His words triggered a memory for me.
I swallowed hard, preferring to forget about that horrible time when I used to dread going to school. The bullying probably only lasted a few months until I screwed up my courage and started fighting back. But ‘Crusher’ Dixon had still left a scar – and not just of the physical variety either.
‘I know. Horrible, eh? It’s amazing how cruel kids can be,’ he said, misinterpreting my expression. ‘So now she’s heavily behind a campaign to stop bullying in school so other kids won’t have to suffer what she did.’
I nodded in admiration.
Crikey. This perfect girl was surely headed for saintdom. I felt humbled and hugely inadequate by comparison.
‘So what’s the problem?’ I asked, carefully. ‘Doesn’t she make you happy?’
Maybe she was too busy rescuing people to have time for sex.
He shook his head. ‘It’s like I really want to be in love with her but somehow I just can’t manage it.’
He stared at me, a querying look on his face, as if he was desperate for me to understand.
And the thing was, I absolutely did.
I laid my hand on his arm. ‘Hey, listen, if the feeling’s not there, you can’t force it. Really. You can’t.’
He nodded, staring at me intently, clearly wanting more.
So I said, ‘I’ve been in situations where I really wanted to be swept away by a guy. To experience all those can’t-live-without-you feelings. But unless it’s the right person, it’s just not going to happen.’
He nodded sadly. ‘I guess I know what you’re saying. It’s just so hard…’
We drank in companionable silence for a moment.
I was aware of Sienna and her friends glancing over at us and wiggling their eyebrows at each other. In other circumstances, I’d have done the introductions. But he wasn’t in a mood for socialising. He just needed to off-load.
‘Anyway, thanks for the chat.’ He smiled. ‘I really appreciate it. Perhaps I’ll stick with her and see how we go.’
I nodded. ‘Good idea. You don’t want to risk losing her if she really might be the one.’
His shoulders relaxed. He looked like a huge weight had just rolled off his shoulders.
He lifted his hand to someone behind me and I turned.
A man with a close-cropped beard and thick, curly black hair was signalling to him, wanting to know if he wanted another pint. Presumably one of his mates, wondering where he’d got to.
My new friend nodded and got up.
We parted with a warm smile and I watched the two of them go off to the bar, the dark-haired man’s arm looped casually around his friend’s shoulders.
Then I said my goodbyes to the girls and headed home to my bath and bed.
I sadly, haven't finished the book yet, though I am loving it! I will review soon!
Thanks to Helena Sheffield at Avon for sending me an advanced copy in exchange for my participation in the blog tour and my honest review, which will follow soon.