November 03, 2014
I'm thrilled to be bringing you an exclusive extract from I'll Take New York by Miranda Dickinson as part of Miranda Mondays, which run until the book is published on 4th December! 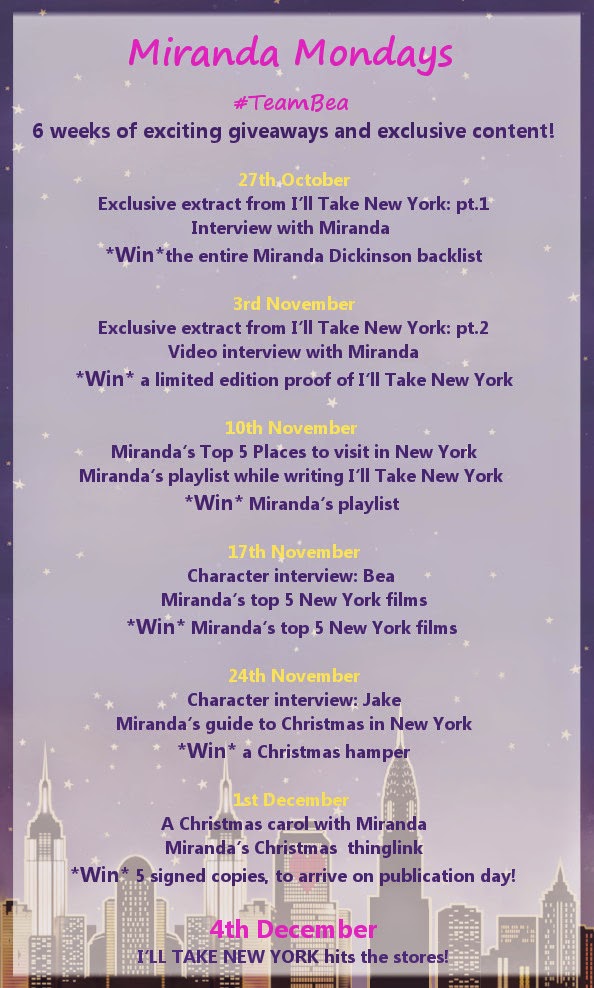 Chapter Two
Departures Hall, San Francisco International Airport, California
‘Are you sure you have everything?’
‘I’m sure. All my worldly possessions that didn’t leave for New York in the movers’ van this morning are in my backpack.’ Jake Steinmann forced a smile as the woman beside him dabbed her eyes with a lace handkerchief. ‘Hey Pam, it’s OK.’
Pam Lomas – Jake’s faithful PA for the past seven years – shook her head. ‘No, I’m sorry. It’s not OK. It’s not OK that your wife’s given up on you like this. It’s not OK that you have to abandon your whole life because of her latest whim. Can’t you reconsider? You have so much in San Francisco: why leave it all now?’
Part of Jake agreed with her. It was unfair – but then, everything that had happened in the past month had felt that way. He shouldn’t be the one to leave: as far as he had been concerned their marriage was a happy one. But realistically what choice did he have? Sure, he could stay in his adopted city and wait for Jessica to change her mind. He could carry on, pretending that life was untouched by his wife’s decision to leave him. But he knew, deep down, that to stay in a city in which every street, sidewalk and brick seemed imprinted with her name would be the end of him. Better to nurse a broken heart on the other side of the country.
‘New York’s not so bad.’
‘It’s the East Coast, Jake! Where you’re just a number in a big city and nobody cares who you are unless you do something for them.’
‘I was born there, remember? I may have the West Coast attitude and a better tan now but I’m a New York guy at heart.’ He put his hand on Pam’s shoulder as she let out a loud sob. ‘Don’t worry about me, OK? I’m going to be fine. My family are in the city, my friends from before I met Jess… I won’t be alone.’
Look out for more exclusives next Monday!

February 06, 2021
Welcome to my stop on the Blog Tour for An Eye For An Eye by Carol Wyer! What They Say: A killer running rings around the police. A detective spiralling out of control. DI Kate Young is on leave. She’s the force’s best detective, but her bosses know she’s under pressure, on medication and overcoming trauma. So after her bad judgement call leads to a narrowly averted public disaster, they’re sure all she needs is a rest. But when Staffordshire Police summon her back to work on a murder case, it’s a harder, more suspicious Kate Young who returns. With a new ruthlessness, she sets about tracking down a clinical, calculating serial killer who is torturing victims and leaving clues to taunt the police. Spurred on by her reporter husband, Young begins to suspect that the murderer might be closer than she ever imagined. As she works to uncover the truth, Young unravels a network of secrets and lies, with even those closest to her having something to hide. But with her own competence—and
2 comments
Read more

January 11, 2019
Welcome to my stop on the Blog Tour for  When Polly Met Olly by Zoe May! I have an exclusive extract for you today! What They Say: Polly and Olly were never supposed to meet… Polly might spend her days searching for eligible matches for her elite list of clients at her New York dating agency, but her own love life is starting to go up in smoke. Even worse, she can’t stop thinking about the very person she’s meant to be setting her latest client up with… surely it can’t get any worse! But then Polly bumps into oh-so-handsome Olly, who heads up a rival agency, and realizes that perhaps all really is fair in love and dating war… Chapter One Surely, I’m not qualified to be a matchmaker?! You’d think getting a job at a dating agency might actually require you to have found love, or at least be good at dating, but apparently not. I’ve been single for three years and I haven’t had a date for six months, yet I’m pretty sure I’m nailing this interview. ‘S
Post a Comment
Read more