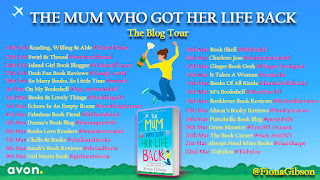 Welcome to my stop on the Blog Tour for the Mum Who Got Her Life Back by Fiona Gibson!

I'm so excited to be part of this tour as I adore Fiona's writing style! This book is hilarious and you really need to read it!

The laugh-out-loud Sunday Times bestseller is back and funnier than ever! Perfect for fans of WHY MUMMY DRINKS.

When her 18-year-old twins leave for university, single mum Nadia’s life changes in ways she never expected: her Glasgow flat feels suddenly huge, laundry doesn’t take up half her week, and she no longer has to buy ‘the Big Milk’. After almost two decades of putting everyone else first, Nadia is finally taking care of herself. And with a budding romance with new boyfriend Jack, She’s never felt more alive.

That is, until her son Alfie drops out of university, and Nadia finds her empty nest is empty no more. With a heartbroken teenager to contend with, Nadia has to ask herself: is it ever possible for a mother to get her own life back? And can Jack and Nadia’s relationship survive having a sulky teenager around?

A gloriously funny and uplifting new book perfect for fans of Gill Sims and Jill Mansell.

Extract From The Mum Who Got Her Life Back

She hadn’t even invited him; he’d been in Glasgow on some work-related mission, and someone had brought him along. We sat together all night, reminiscing about college and, eventually, indulging in a little furtive hand-holding and kissing. ‘Be good, you two!’ Corinne had chuckled as we left together.

I took him back to my place where we crept in gingerly at 6.30 a.m. There was no real need to creep – Molly and Alfie were away on a school trip to France – but still, I’d half expected them to jump out from behind the sofa yelling, ‘Ah-a! So here’s our filthy mother, drunk and with a man!’ Even when Ryan and I went to bed, I was still on edge in case they charged in, flung down their rucksacks and clicked on the dazzling overhead light.

In the four days that followed, it felt as if we were teenagers, getting it on as much as humanly possible before my parents returned. When the kids phoned home, it was an almighty effort to put on a normal voice as I asked about their trips to Parc Astérix and the Camembert factory, which Alfie especially loved (ironic, given that he is now a vegan and regards cheese as the devil’s work: ‘No, I don’t miss it, Mum. Why’s everyone so obsessed with cheese?’ Because it’s heavenly! I always want to retort).

During that whole time, Ryan and I barely left my flat. We had pizzas delivered – cheese-laden pizzas – and drank wine during the day. We had long, languid baths together, with Ryan graciously occupying the tap end. It was terribly decadent but then, it had marked the end of yet another lengthy sex drought for me. It was as if I’d been on a juice fast – not just a weekend ‘cleanse’, but for two bloody years – and had then been presented with a mountain of profiteroles. I started to think we might have a ‘thing’, albeit of the sporadic, long-distance variety, as Ryan was still based in London. Like an idiot, I pictured him nipping up for weekends, and me standing there – blow-dried, make-up immaculate – at Glasgow Central station, waiting for him.

The Mum Who Got Her Life Back is out now in Ebook and Paperback from Avon Books!

Thanks to Fiona Gibson and Sabah Khan for allowing me to participate in this tour!