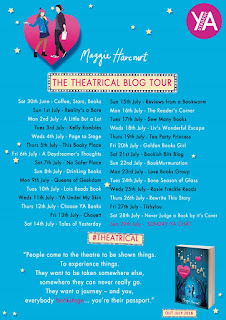 Welcome to my stop on the blog tour for Theatrical by Maggie Harcourt!

Hope dreams of working backstage in a theatre, and she's determined to make it without the help of her famous costume-designer mum. So when she lands an internship on a major production, she tells no one. But with a stroppy Hollywood star and his hot young understudy upstaging Hope's focus, she's soon struggling to keep her cool...and her secret.

I loved the premise of this book! It sounded cute and interesting and different to other books I've read.Theatrical was all of those things and more! It took a little while to get going but when it did, I was hooked!Hope is a great character! She's real, determined, charismatic and so funny without really meaning to be. She knows what she wants and does her utmost to achieve it. She doesn't take crap from anyone and works hard to prove herself.The theatre setting is so refreshing and different. It was fun learning about what goes on behind the scenes and getting thrown into that world. I had no idea it was so involved and complex!There is a great twist on boy meets girl and it was lovely to watch it unfold as the story progressed.Overall, I really enjoyed Theatrical and will look out for Maggie's other books!  9/10

A Few Words From Me:

As part of my blog tour stop, I was asked to share with you some of my favourite theatre moments, plays etc... I can't really do this. I have only seen one play, Romeo and Juliet when I was in middle school. I loved it! I love everything about Romeo and Juliet. It was romantic, tragic and the whole experience was magical. I have seen several musicals and I expect the backstage, behind the scenes experience with those must be fairly similar to a play. Obviously, it will differ due to live orchestras and vocal warm ups etc but the behind the scenes magic will still be the same.

Before I read this book, I'd never really thought much about it all. I suppose unless you're a part of it, you don't. But Theatrical has given me a great insight into a world I'd never wondered about and I liked that! Next time I see a live show of any kind, I think I'll be more aware of what it took to make it happen so flawlessly.

Theatrical is out now in paperback and on kindle with Usbourne YA publishers! Thanks to Stevie Hopwood for sending this to me for review. Follow the tour and use #Theatrical to see what we're all talking about!