Blog Tour Stop - Her Name Was Rose by Claire Allan 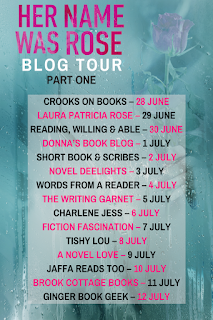 Welcome to my stop on the blog tour for Her Name Was Rose by Claire Allan! I am delighted to bring you an exclusive piece from Clair about her process of writing this book, her first thriller!

Her name was Rose. You watched her die. And her death has created a vacancy.
When Emily lets a stranger step out in front of her, she never imagines that split second will change her life. But after Emily watches a car plough into the young mother – killing her instantly – she finds herself unable to move on.
And then she makes a decision she can never take back.
Because Rose had everything Emily had ever dreamed of. A beautiful, loving family, a great job and a stunning home. And now Rose’s husband misses his wife, and their son needs a mother. Why couldn’t Emily fill that space?
But as Emily is about to discover, no one’s life is perfect … and not everything is as it seems. 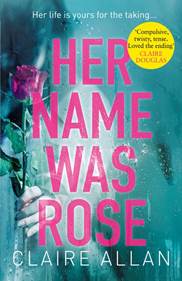 Writing ‘Her Name Was Rose’ was a challenge for me. Perhaps the biggest writing challenge of my career to date.

For the previous ten years I had been writing women’s fiction for Irish publisher ‘Poolbeg Press’ and had enjoyed success within the Irish market. I’d loved writing books which told the stories of women and their trials and tribulations, adding a little humour in where appropriate.

But eight books in, I really wanted to write something a little darker.
Which proved difficult because I tend to try and avoid the darker aspects of life as much as possible. I also have an almost pathological need to be seen to be “nice” by almost everyone I meet.

So it was always going to be a challenge to dig a little deeper and unleash some sort of inner darkness. I knew from fairly early on that ‘Her Name Was Rose’ would deal with some pretty hard-core subjects, but in a very different way than my previous books had done.

With women’s fiction, I tended to focus on the bonds of friendship and family. Turning to crime, I had to look very closely at what happens when those bonds are absent or toxic.

And throughout I had the mantra running through my head that if I was going to go darker for this book then I had to go at it full throttle. No half measures.

If I was going to leave Mrs Nice Author behind, I had to do it with style.

At times writing a darker book proved to be quite an emotional challenge. To write difficult times for your characters you have to put yourself inside their heads and think very intently about what it would be like to be in a place of fear, or great pain. I had to look at grief and abusive behaviours and at times that felt like a heavy burden.

Although these characters are fictitious, in the midst of writing the book they can feel very real and as a writer, I carried these feeling around with me.
I wasn’t always a pleasant person to be around when I was in the midst of writing – and at times I had to up my self care routine to make sure I didn’t feel too weighed down by the seriousness of the topics.

But I think I succeeded in digging deep enough to pull together a book that has as much of an emotional punch as it does a fast paced thriller. The characters of Emily and Rose, and those who surround them in the pages of the book, are characters I hope feel real, and flawed and relatable and that unleashing my darker side makes for a strong, unforgettable read.

A former journalist and columnist, Claire Allan has been writing fiction since 2006.

An Irish Times bestseller, she has tackled issues from post-natal depression, infertility, and dementia through to writing a based-on-a-true-story book about a couple reunited after 50 years apart. She has now decided to unleash her dark side!

Married with two children, two cats and a mad puppy she is happiest lost in a good book. She has kissed Michael Buble.