Welcome to my stop on the Blog Tour for I Never Lie by Jody Sabral! I have an exclusive piece written by Jody about her writing process.

Is she the next victim? Or is she the culprit…?
Alex South is a high-functioning alcoholic who is teetering on the brink of oblivion. Her career as a television journalist is hanging by a thread since a drunken on-air rant. When a series of murders occur within a couple of miles of her East London home she is given another chance to prove her skill and report the unfolding events. She thinks she can control the drinking, but soon she finds gaping holes in her memory, and wakes to find she’s done things she can’t recall. As the story she’s covering starts to creep into her own life, is Alex a danger only to herself – or to others?

This gripping psychological thriller is perfect for fans of Fiona Barton, B A Paris and Clare Mackintosh. 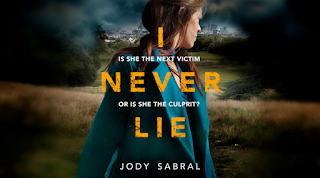 People always ask me, ‘What’s your starting point as a writer?’ My reply? ‘I have themes that I feel passionate about, but the starting point for me is character. It’s always character.’ For me, plot is born from character, not the other way around.

I recall writing my one page synopsis for I NEVER LIE while pitching the idea to my agent. He wanted me to nail the story on that one page. I worked tirelessly at it, but something wasn’t working so I decided to just start writing the book and as I got about two thirds of the way through it the synopsis just came to me. I literally sat down and wrote it in twenty minutes and that was it, done. I sent it off to my agent and he replied, ‘You’ve nailed it!’ and I had.

It’d had taken hours, even days to put that first draft of the synopsis down and I realised through this experience that I am the kind of writer who likes the journey of exploration, I’m not someone who maps it all out before I start. I let my characters take me where they need to go and that is how I write. It means I have a lot of rewriting to do, but I’m okay with that because for me that is the best bit. The layering of the story, crafting it from the first, then second, and sometimes up to the fourteenth draft and beyond.

I lose count of the rewrites because it’s just part of my process. Like a painter faced with a canvas, I go back and apply the next layer of paint. I reread and find inspiration from my original words. It also means I need time away from those words so I can detach from them. It’s a process and everyone’s writing process is unique.

It’s not something I learned on my MA in creative writing at City University. That course was brilliant for critiquing narrative and developing my writing in terms of retraining from writing news to writing creatively, but understanding and nurturing my own process actually came from listening to a series of BAFTA podcasts in which established writers talked about theirs.

Those podcasts gave me the confidence to trust in my own method which was fundamentally led by my intuition. I discovered in those podcasts writers admitting they didn’t read as much as they should – as the voice of other writers could influence their own work, which I now find to be true for me; That they also liked the journey of discovery; That not everyone plotted out the entire story before starting which gave me the confidence to follow my own path.
These days, my agent knows he’s going to get a rough outline, but that it will likely change as I’m writing. It’s a relationship of trust and of understanding just how the individual writer works. In the early days I went to plenty of writing festivals where I listened to writers like myself handing out tips, which was great. It gave me useful tools to deploy, but honestly, it’s an individual journey.
I tend to leave scenes unfinished at the end of my writing day so that I have something to return to. This means I can jump straight into writing the next day, which is the hardest part of my day, because I seem to have a naturally inbuilt resistance to just starting. I don’t know why, it’s the settling that takes me a while but once in the zone I keep going, plodding along through the words. Some days it works, some days it doesn’t, but I keep doing it because I simply don’t know how not to.


Jody Sabral is based between the South Coast and London, where she works as a Foreign Desk editor and video producer at the BBC. She is a graduate of the MA in Crime Fiction at City University, London. Jody worked as a journalist in Turkey for ten years, covering the region for various international broadcasters. She self-published her first book Changing Borders in 2012 and won the CWA Debut Dagger in 2014 for her second novel The Movement. In addition to working for the BBC, Jody also writes for the Huffington Post, Al–Monitor and Brics Post.
Twitter:  @jsabral
Follow the Tour! 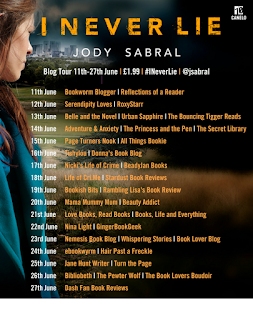