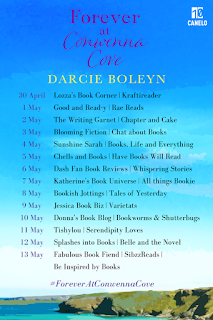 Welcome to my stop on the Blog Tour for Forever at Conwenna Cove by Darcie Boleyn!! 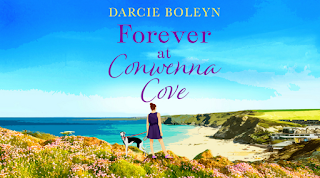 'If you have never read a book by Darcie Boleyn you are definitely missing out. ' Rae Reads

Following heartbreak, Zoe Russell found a haven in Conwenna Cove. As the owner of the village diner and a volunteer for the local greyhound sanctuary, she’s happy with her peaceful life. Local surfer Nate Bryson plans to leave Conwenna and see the world. He wants to shake off his reputation as a ladies man and start again somewhere new. Before departing, Nate decides to raise funds for the dog rescue home as a way of giving back to the community. When Nate approaches Zoe to help with the charity event she sees there’s more to him than meets the eye. Nate can’t believe he’s failed to notice the kind and beautiful woman right before him. But can two such different people ever be together, especially if one of them is determined to leave?

The lovely Darcie was generous enough to give me an extract to share with you today!!

Nate walked along the main street early on Monday morning with a smile on his face. It was going to be a beautiful day. The air was warm and a gentle breeze blew in from the sea, gently caressing the bright pink and purple geraniums growing in the window boxes outside the cafe and toying with the lavender stems, causing their sharp, sweet scent to rise. He loved this time of year. It always made him feel as if anything was possible, which was probably a good thing this morning, seeing as how he was going to be asking local business people to help fund Surf for Sighthounds. He decided to go down to the harbour first, then work his way back up the main street.


When he reached the harbour, he took a few moments to stand in front of the rail to savour the beautiful view. The tide was in and small white boats bobbed on the water, their windows glinting in the sunlight. From further out at sea, he could hear the whine of an engine, presumably someone either heading out or returning from a fishing trip. He rested his hand on the railing; the metal was cold and damp with dew as the sun hadn’t yet had time to warm it.


Nate loved the sea. He was more at home on the water than he was on solid ground. When he was swimming or on a surfboard, he experienced a freedom that he didn’t feel on land. He’d been that way for as long as he could remember. As a child, he’d been quiet and reserved; in high school he was teased for his shyness and even beaten up a few times when he refused to get involved with some of the shenanigans that other teenage boys thought made them appear daring and brave. But he had always loved to swim. His father took him when he was very young then, when he was old enough, he’d go to the local leisure centre in Newquay to swim early in the morning before it became busy. In the water, as he swam, he was alone with his thoughts and his breathing, able to escape from other people and their demands and assumptions. He could just be himself. All the swimming paid off and he grew strong and fit and, coupled with a growth spurt, he was soon tall and stocky enough to take care of himself. When he tried body boarding, then surfing, in his early teens, it became an obsession for him. Days, weeks and months spent in the surf made his skin tanned and bleached his hair. Before he knew it, Nate was one of the guys and the shy, quiet boy he’d been was replaced with a popular, outgoing young man.


Nate might not have been the brightest in his school year – he was never going to be a doctor or an accountant – but he passed his exams and left school as soon as he was old enough. He spent two years at college studying for A levels but his lack of dedication and interest, combined with his desire to spend all his free time at the beach, meant that he hadn’t achieved pleasing grades in further education. But he hadn’t minded. He’d worked at different jobs, from helping out at a garage to teaching surfing to holidaymakers and pouring pints at several different pubs, as well as working as a lifeguard. He had got by over the years, and he’d been content.


It was just that now he was starting to wonder if he’d actually done anything worthwhile with his life. He didn’t have a career – he enjoyed surfing and had entered competitions but had never made it as a professional (the competition was fierce) – and he had never been in love. He’d thought that it was okay to drift along during his twenties but at six years off forty, he needed to do something meaningful at some point soon. He had organized Surf for Sighthounds two years ago but it had been a relatively small affair, and he was hoping that this time it would be bigger and raise more money.


The clinking of glass dragged him from his thoughts and he glanced over at the wine bar on the edge of the harbour. One of the employees was putting out the recycling. That was one thing with busy summers: there was far more recycling to be sorted then, than in the winter months.


He checked his mobile and was surprised to see that it was eight-thirty. He must have been day dreaming for over twenty minutes. It was so easy to lose time when he got lost in his thoughts. He turned around and spotted Zoe Russell in the window of her diner, wiping the glass with a yellow cloth. Seeing that she was there, he thought he might as well go and speak to her first.


Nate ran a hand through his hair then made his way over to the diner, a strange fluttering in his belly making him take a few deep breaths.


As he walked towards her, Nate saw Zoe stop cleaning and looked beyond whatever it was that she could see on the glass. She frowned, it seemed, when she realized he was approaching the diner. He took another deep breath before knocking on the door, suddenly worried that this wasn’t going to be easy at all.


‘Hello.’ Zoe stepped into view, the frown replaced by an expression of interest.


‘Morning, Zoe. I was wondering… could I come in and talk to you for five minutes?’


‘Oh!’ She folded the yellow cloth several times before replying. ‘I guess so. But I don’t have long. This place needs a blitz before I open today, and I have to pop up to Foxglove Farm to collect my ice cream order.’


‘I thought they delivered.’


‘They do, but… I like to make an effort to visit the greyhounds.’


Her cheeks flushed slightly, as if she was a bit embarrassed about admitting this to him and revealing her softer side.


‘I’ve seen you.’ Her blush deepened. ‘I mean… I saw you… When I was up there last week. You had two of the dogs and were taking them to the field.’


‘About the dogs?’ She smiled briefly and Nate saw something in her expression – a softening that made her prettier. Not that she wasn’t pretty, because he could see that she was, but with her brown bob and willowy figure, she wasn’t as in-your-face attractive as the women Nate usually dated.


Nate followed her into the diner, taking in the Fifties decor and the scent of lemon that he suspected came from whatever cleaning products she’d used that morning.


‘That would be great, thanks.’

How good was that??!! Thanks Darcie!!

Darcie Boleyn has a huge heart and is a real softy. She never fails to cry at books and movies, whether ending is happy or not. Darcie is in possession of an overactive imagination that often keeps her awake at night. Darcie fell in love in New York, got married in the snow, rescues uncoordinated greyhounds and can usually be found reading or typing away on her laptop.