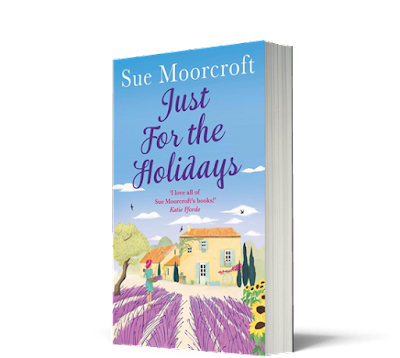 Welcome to my stop on the Blog Tour for Just for the Holidays by Sue Moorcroft!

How pretty is this cover? So gorgeous and summery! 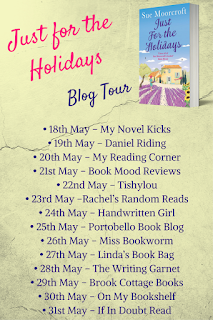 PUBLISHES IN EBOOK & PAPERBACK: 18TH MAY

What They Say:
In theory, nothing could be better than a summer spent basking in the French sun. That is, until you add in three teenagers, two love interests, one divorcing couple, and a very unexpected pregnancy.

Admittedly, this isn’t exactly the relaxing holiday Leah Beaumont was hoping for – but it’s the one she’s got. With her sister Michele’s family falling apart at the seams, it’s up to Leah to pick up the pieces and try to hold them all together.

But with a handsome helicopter pilot staying next door, Leah can’t help but think she might have a few distractions of her own to deal with…

A glorious summer read, for you to devour in one sitting - perfect for fans of Katie Fforde, Carole Matthews and Trisha Ashley.

I'm so excited to have this extract on my blog today! I can't wait to read the rest of this book! It sounds perfect for sitting in the garden with a cold drink while the sun shines!

Leah’s jaw dropped. ‘Pregnant? Michele –!’
‘I know, I know!’ Michele’s shoulders heaved. ‘It’s come at exactly the wro-wrong time. But tha-at’s why I nee-ee-eed you. Everythi-ing’s such a mess.’
‘If your life gets much messier, soap operas will be stealing your storylines,’ Leah agreed, though not without compassion. ‘Does Alister know about the baby?’
‘Of course! The poor man thinks I’ve undergone a personality transplant. I’ve still got to find a way to tell Jordan and Natasha! And what about Baby Three? What kind of family life is she or he going to be born into?’
Leah slid a comforting arm along Michele’s shoulders. ‘Is the baby Alister’s?’
Michele flung herself upright, tears on hold as her best indignant teacher’s voice cracked out. ‘Leah! If even you think the worst of me, I might really shoot myself!’
‘Sorry.’ Leah backtracked hastily as her sister’s face crumpled into a still more tragic mask. She did love Michele, no matter how much they jokingly referred to themselves as ‘Chalk’ and ‘Cheese’, Michele being eight years older, the very married and motherly Mrs Milton; Leah the resolutely single and child-free Ms Beaumont. Michele having a sensible job in teaching; Leah having what Michele termed ‘a silly job’ in chocolate products – though it paid better than Michele’s sensible one. Despite having the bossy and manipulative tendencies that she seemed to feel the right of an elder sister, Michele had also stuck up for Leah a million times and provided whatever was needed in the way of bolthole, wise counsel or shoulder to cry on.
‘All right, I’ll come,’ Leah capitulated, ‘if I get the garden annexe, as agreed. I’m not used to family life and I need my space.’
‘It would be better if Alister was out there.’ Michele grabbed a fistful of kitchen roll to trumpet noisily into. Then, catching Leah’s eye, ‘Oh, OK, if that’s what it takes. Thank you.’
Leah ignored the whiff of reproach. Her claiming La Petite Annexe would force Alister and Michele into prox­imity in the main house. Maybe Michele’s uncharacteristic decision to hurl her family into upset and confusion might yet prove to be a feature of early-pregnancy hormones?
Away from the daily stresses of home, of Michele being a teacher and Alister a head teacher, things might improve.
Then Leah could quietly pack up her car and give them privacy to realign their relationship. Behind her back, she crossed her fingers.
Thanks so much to Sue Moorcroft for allowing me to share this with you! Thanks to Sabah Khan at Avon Books for all her hard work on the tour. Congratulations on the new book, Sue!