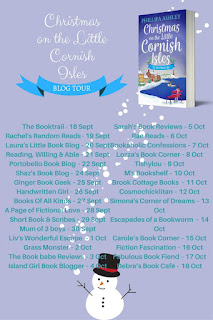 Welcome to my stop on the blog Tour for Christmas on the Little Cornish Isles: The Driftwood Inn by Phillipa Ashley
What They Say:
Christmas has arrived on the Cornish Isles of Scilly, bringing mistletoe, surprises and more than a sprinkle of romance . . . Fans of Poldark and Carole Matthews will love this brand-new festive read from the author of the bestselling Cornish Café series.
For Maisie Samson, this Christmas is going to be different. After years working in a busy Cornish pub, she’s moved back to quiet Gull Island where she grew up, to help her parents run the family inn.

But even though she can’t wait for the festive season to arrive, Maisie cannot shake the memories of what happened to her last Christmas – the day she lost everything. She keeps herself busy, setting up the tree and hanging mistletoe ready for her first proper family Christmas in years.

Until a new arrival to the island walks into her bar and changes everything. Australian backpacker Patrick is looking for a job for the low season. When Maisie takes him on, she doesn’t expect him to last the week, but to her surprise Patrick is the perfect fit. Charming and handsome, could Maisie allow herself to hope that she and Patrick could be more than just colleagues?

As Christmas approaches, Maisie finds herself dreading the spring, when Patrick is due to leave. With the help of a little Christmas magic, can Maisie get the happily ever after she always dreamed of?

Later that afternoon, Patrick closed his laptop in the upstairs bistro and gave himself time to reflect on the crazy, impulsive decision that had led to him signing up for six months at the Driftwood Inn. He’d emailed Judy at the Fingle and the owner of the restaurant where he’d worked previously to warn them he would be staying in the UK over the winter and to expect his new employer to take up references.

He crossed to the window and took in the magnificent view over the channel towards Petroc. With its white sand, flowers and low-lying islands set in a turquoise sea, it could easily be Port Fairy in western Victoria. He’d not expected to find a place in England that so reminded him of home; but then again, the beauty of the place was the least surprising thing about the situation. He’d only been in the country a few days and here he was, staying for half a year.

If he made it that far, of course. If Maisie didn’t throw him out first, or he quit in sheer frustration.
Hazel and Ray Samson had been – how could you put it – ‘taken aback’ when Maisie had delivered the news and introduced him. Ray had shaken his hand warmly and seemed relieved that there would be an extra pair of hands around the place. The guy wasn’t well, his face was pale and drawn and he’d been breathless and sweating while he was up on that roof. Hazel was trickier to read. She’d recovered from the initial shock quickly and joked that Maisie hadn’t wasted any time in taking on new staff, yet there was something about the way she’d watched him, when she thought he wasn’t looking, that made his hackles rise. She didn’t trust him: and he didn’t blame her. If Hazel had been thinking that Maisie could do with a man, for practical and other purposes, he definitely wasn’t the right one in Hazel’s eyes. Patrick suspected that they might be bothered about his criminal record.
He could understand their concerns and was prepared to live with Hazel’s distrust but there was an even bigger hurdle to get over. Even as she was introducing him to her parents, he suspected Maisie was already kicking herself for giving him the job. Her discomfort radiated from every pore and showed in her tight smile as she introduced him; in the way she stood with her arms wrapped around her chest while her dad shook his hand and her mum made jokes about kangaroos and boomerangs. He had a feeling Maisie Samson was regretting letting him into her home, her business and her life and he didn’t think that was entirely down to his chequered past.

So why had she agreed to take him on?

And what bloody stupid idea had made him ask?

Six months he’d signed up for. Half a year at this tiny pub with this determined woman who already occupied his thoughts far too much. He’d never seriously thought she’d say yes to his offer to work for her. He’d been amazed when she’d agreed, even after he’d told her the worst of him: the jail, the drink, the drugs.

And yet a voice nagged at him. Gnawed at him. He still hadn’t told her the very worst about him, had he? He’d kept back the part that would freak her out. It would have got him thrown out of the pub, and off the island too, if she knew.


Thanks to Sabah Khan for allowing me to participate in the blog tour!