Welcome to my stop on the blog tour for The Bed and Breakfast on the Beach by Kat French! 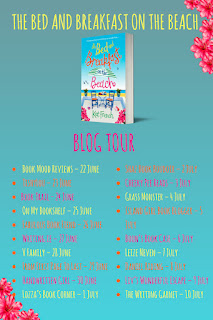 Sadly, I haven't yet had a chance to read this gorgeous looking book as my Dad has been unwell, but I am very much looking forward to it when I can! So, instead of a review, I have an extract just for you!


From Kat French, the author of best-selling ‘My Perfect Stranger’ and ‘Love Your Neighbour’ comes a story that all women will be able to relate to – the perfect read for a beach holiday or to keep you company on a train journey this summer.

Three women throw caution to the wind and move from England to run a B&B on a Greek island…
They’ve all reached a point in their lives when they need a change – one divorced, one empty nester, one made redundant from the job she’s held since leaving school many moons ago. The move tests their friendship to the limits, brings errant husbands running, and offers new opportunities for love.
Each of the women go through their own metamorphosis, but will they choose to stay in Greece when the holiday season winds down?
This is the perfect escapist read for fans of Lucy Diamond, Milly Johnson and The Durrells – escape to a Greek island and forget about your troubles with this glorious summery romance

Read Below for an Exclusive Extract!


Winnie stared at her old single bed, which at that moment was barely visible beneath summer clothes, swimsuits, bumper-size bottles of factor 30 and beach towels. How do you pack for a one-way trip to Greece? She wasn’t sure if she should pack for a week or throw her entire wardrobe in her suitcase, because she didn’t know if they were heading back to Skelidos for a week to try to wriggle out of the contract or for a lifetime to start a new chapter. Thanks to the lethally large cocktails, she also wasn’t sure whether Ajax was their fairy godfather or had played them like a crack hot conman. He’d kept them fuelled up on his secret recipe gin and lured them in with tales of his bucolic life on the island, and, their tongues loosened by the alcohol, they’d poured out their woes faster than three leaky jugs.
He hadn’t even directly suggested that they buy the villa, at least not at first. He’d talked around it, and let them think it was their idea. It was just damn good fortune that Nikolas happened to be the local property notary and had had the sales paperwork already drawn up in preparation for the planned sale which had just fallen through at the last moment. Convenience, or fate? Either way, he’d had them signing on the dotted line and arranging bank transfers with lightning speed, all buoyed up by Ajax and his constant supply of free drinks and his endless tales of how marvellous life on Skelidos was going to be for the three women. What an adventure they’d have! What a brave and smart move to leave grey old England behind for the idyll of sunny Greece! He’d sealed the deal with big fat tears as they signed, tears of joy tinged with sadness that his wonderful B&B was now in new hands and that he’d forever leave part of his heart there when he and Nikolas moved to Athens in a few days’ time. Nik had accepted a high-profile job over on the mainland, and much as they adored their one-long-honeymoon island life, the bright city lights were calling.

Ajax was in no doubt; fate had conspired to bring Winnie, Stella and Frankie to his island at that precise moment because this place was now their destiny, not his. At heart, Winnie was a believer in fate and superstition; the idea that she’d been guided to the island charmed her all the way to the bank. Frankie, of course, felt more guided by Marcia’s instruction to find adventure; she’d needed little in the way of persuasion to realise that this would certainly be that. Stella had been perhaps the most hesitant of the three, until Frankie and Winnie had decided that they’d find a way to buy it together even if Stella decided it wasn’t for her. The idea of missing out on a potential business opportunity and a life in the sun with her best friends had proved too tempting to pass up, and in the end she’d signed on the understanding that she could always pull out after a year if she wanted to. They each had their own reasons for signing, and for all of them there was an element of running away and an element of looking for a new place to call home.

A text alert vibrated her phone, making it rattle and jump around on the little pine bedside table. Winnie lunged for it before it slid off the edge, momentarily grateful for the distraction until she saw who had sent the message.

Did I really need to hear you’re leaving the country from Stella’s sister-in-law? What am I supposed to do, send the divorce papers by carrier pigeon? I’ve never even heard of the fucking place.
Winnie closed her eyes and took a few measured breaths so she didn’t text back the response hovering on the tip of her fingers.

Did I really need to hear you were screwing the girl from the canteen from your secretary? What was I supposed to do, make your favourite dinner more often and be more adventurous in the bedroom? You’ve no fucking right to question me.

God, it was tempting and Rory completely deserved her animosity. She didn’t write the message though, because she was slowly coming to realise that the person her anger hurt the most was herself. He’d probably check his phone, roll his eyes and delete the conversation before his precious receptionist realised he’d sent a text to his ex-wife. Winnie, on the other hand, would feel the after-effects of their exchange like a hangover without any of the fun first, miserable and heartsick until she could return the whole sorry situation to its box at the back of her head.

The internet works perfectly well in Skelidos. Please send all solicitors’ correspondence via email and I’ll make sure it gets back to England without delay.


Thanks so much for joining me on this tour! I'm sure I'm going to love this book!


The Bed and Breakfast on the Beach is out now with Avon Books!


Thanks to Sabah Khan at Avon for sending me an ARC in exchange for my review, which will follow asap.