Welcome to my stop on the blog tour for The Last Days of Jack Sparks by Jason Arnopp!

The Blurb:
﻿
﻿
It was no secret that journalist Jack Sparks had been researching the occult for his new book. No stranger to controversy, he'd already triggered a furious Twitter storm by mocking an exorcism he witnessed.

Then there was that video: forty seconds of chilling footage that Jack repeatedly claimed was not of his making, yet was posted from his own YouTube account.

Nobody knew what happened to Jack in the days that followed - until now.

Prepare for the cleverest, most addictive thriller you will read this year. This is the story of the ill-fated Jack Sparks - a man who plays with fire, and pays the price . . .

I was really intrigued by this book before I started reading. It sounds so bizarre. I wasn't sure if it was meant as a spoof or a real, genuine horror/thriller told from a very odd viewpoint.

It was the latter. This book is sheer genius! So gripping from the off and so completely compelling, I defy you not to read it in one sitting. Jack Sparks is so different from anything else I have read yet I found it really easy and satisfying to stay engrossed in the pages. It's fast paced once it starts.

It's hard to review without giving anything away. I read a lot of other review before writing my own to see how others avoided this. Seems many people struggled with the same thing.

Basically, you need to read this book to find out for yourself. If you have ever enjoyed a Stephen King book, give this a shot. It's so different and completely bonkers in the best possible way. 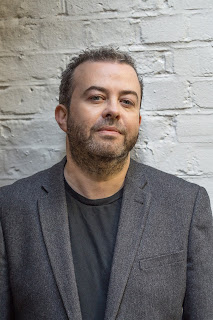 Jason Arnopp is a British author and scriptwriter. His background is in journalism: he has worked on titles such as Heat, Q, The Word, Kerrang!, SFX and Doctor Who Magazine. He has written comedy for Radio 4 and official tie-in fiction for Doctor Who and Friday The 13th. The Last Days of Jack Sparks is the first novel which is entirely Jason’s own fault (though some readers will blame Jack himself).

Thanks to Clara Diaz at Little Brown for sending me an advanced copy in exchange for my honest review.