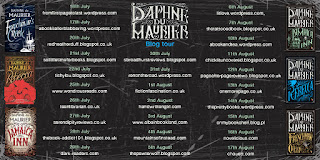 Welcome to my stop on the Daphne DuMaurier blog tour!
Daphne du Maurier is one of the best-loved writers of the 20th century.
Written with a page-turning mixture of passion, suspense and intrigue,
these are novels with genuine cross-generational appeal.
In addition to our new series style, we will be launching editions especially for the young adult market.

I don't really read many classics as I normally struggle to relate to them, but this blog tour intrigued me so I said yes with no hesitation and chose to read Rebecca for the first time.

Rebecca by Daphne Du Maurier tells the story of a young, unnamed protagonist who meets a handsome, older gentleman, Maxim de Winter, in Monte Carlo. It is well-known that Maxim's widely adored wife Rebecca, has recently drowned at sea and the local people of Maxim's home county are devastated. The main character quickly falls in love with Maxim and the couple enter into a whirlwind marriage despite Maxim's troubled past. On arriving home to Maxim's West Country estate 'Manderley' after their honeymoon, the unnamed protagonist faces a painful struggle against the 'other woman' Rebecca, whose presence at Manderley remains overbearing even from beyond the grave. Maxim's new wife is constantly compared to Rebecca, who was loved and admired by all, and faces cruelty from the malevolent Mrs Danvers, Rebecca's old maid. As the new lady of the house, the main character struggles to adjust to Maxim's more privileged way of life and to find her own identity amongst Rebecca's legacy. However, as the story unfolds it becomes clear that Rebecca was not as angelic as people had believed her to be and her death is not as tragically accidental as it would seem...

As soon as this book arrived, I was so intrigued I began reading it. I got 50 pages in before I knew it and I wonder now why I have never read this book before...

Although the language is exactly as you'd expect from a book published in 1938, the story is not old, nor is it hard to follow. It is a classic tale of love gone wrong, of deceit and corruption. There is intense sadness, pain and anger. There is intrigue, mystery, suspense and even humour.

No one is really as they seem (or are they?) and I was not quite sure where we were headed throughout this book. I really am surprised at how dark it is, and also that I never knew that before!

There really isn't a lot else I can say about Rebecca. If you like dark stories with a twist, you'll probably like this. If you don't read a lot of classics but want somewhere to start, this may be for you. It has probably opened my eyes to a new world of literary classics!  8/10

I'd like to thank Poppy Stimson at Little Brown for sending me this book in exchange for my honest review.