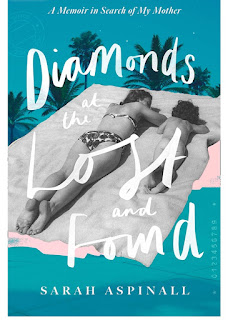 Welcome to my Blog Tour Stop with Review of Diamonds At The Lost And Found by Sarah Aspinall.

For readers of Hideous Kinky, Dadland and Bad Blood; the astonishing, beguiling story of Sarah Aspinall’s harum scarum childhood, and a love letter to a woman who defied convention to live a life less ordinary.

My Mother attracted unusual people and events to her, and she made things happen….

Sarah Aspinall grew up in the glittering wake of her irrepressible mother Audrey. Born into poverty in 1930s Liverpool, Audrey had always known that she was destined for better things and was determined to shape that destiny for herself. From the fading seaside glamour of Southport, to New York and Hollywood, to post-war London and the stately homes of the English aristocracy, Audrey stylishly kicked down every door she encountered, on a ceaseless quest for excitement – and for love.

Once Sarah was born, she became Audrey’s companion on her adventures, travelling the world, scraping together an education for herself from the books found in hotels or given to her by strangers, and living on Audrey’s charm as they veered from luxury to poverty – an accessory to her mother’s desperate search for ‘the one’.

As Sarah grew older, she realised that theirs was a life hung about with mysteries. Why, for instance, had they spent ages living in a godforsaken motel in the Kill Devil Hills, North Carolina? Who was the charming Sabet Sabescue, and what was his hold over Audrey during several months in Cairo? And what on earth happened to the heirlooms that an ancient heiress, Miss Gillette, gave Sarah when they visited her in Palm Springs?

And why, when they returned to Southport was Audrey ostracised by the society she so longed to be part of?

Diamonds at the Lost and Found tells the story of how Sarah eventually pulled free of her mother’s gravitational pull to carve out a destiny of her own. It is a beguiling testament to dreams, defying convention and exasperated love.

The blurb for this booked oozed glamour and drama so I was intrigued when I was offered the chance to read it.

From the off, I was swept into a world that I've never been a part of, nor have I ever wanted to be.  But I liked it! I really felt for Sally, growing up with her mother always chasing something bigger and brighter. The child was whisked around the world on her Mother's whims and eternal quest for love and adventure. In some ways, this would have been an exciting and alternative education, but in others  it must have been terribly lonely and often confusing.

I don't really know how to review tbis book. It isn't like anything I've read before and it has left me feeling a little dazed. I mean this in the best way, though. This book will stay with me for a long time and will be recommended to everyone. 8.5/10

Thanks to Hannah Bright for the chance to read and review this book! 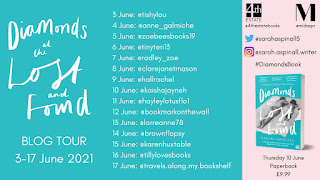 December 09, 2020
Well, it's that time of year again! My Books of the Year list is here and I'm excited to share it with you! I have read 57 books (as of today, 09/12/20) but there will be at least a couple more to add, I'm sure. Find me on Goodreads to see the full list of books I've read this year. I chose my Top 15 books Plus a few special extras, as I read so many awesome books! 1 5. Pretending - Holly Bourne 14. The Gin O'clock Club - Rosie Blake 13. The Storm - Amanda Jennings 12. Flying Solo - Zoe May 11. Kate and Clara's Curious Cornish Craft Shop - Ali McNamara 10. The Secret Admirer (DI Natalie Ward Book 6) - Carol Wyer 9. Strangers - CL Taylor 8. The Secret Seaside Escape - Heidi Swain 7. In Case You Missed It - Lindsey Kelk 6. My One True North - Milly Johnson 5. My Pear-Shaped Life - Carmel Harrington 4. What We Leave Behind - Anna Mansell 3. Just My Luck - Adele Parks 2. The Unwrapping of Theodora Quirke - Caroline Smailes 1. Invisible Girl - Lisa Jewell Favourite N
Post a Comment
Read more

February 06, 2021
Welcome to my stop on the Blog Tour for An Eye For An Eye by Carol Wyer! What They Say: A killer running rings around the police. A detective spiralling out of control. DI Kate Young is on leave. She’s the force’s best detective, but her bosses know she’s under pressure, on medication and overcoming trauma. So after her bad judgement call leads to a narrowly averted public disaster, they’re sure all she needs is a rest. But when Staffordshire Police summon her back to work on a murder case, it’s a harder, more suspicious Kate Young who returns. With a new ruthlessness, she sets about tracking down a clinical, calculating serial killer who is torturing victims and leaving clues to taunt the police. Spurred on by her reporter husband, Young begins to suspect that the murderer might be closer than she ever imagined. As she works to uncover the truth, Young unravels a network of secrets and lies, with even those closest to her having something to hide. But with her own competence—and
2 comments
Read more